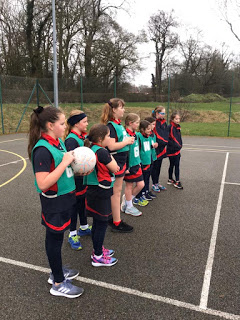 U11B played some wonderful  netball at the Leicester Grammar school tournament. 4/5 games
ended in convincing wins with some amazing feeds into the D and shooting. The defence worked hard to catch rebounds and block some players and the centre court showed real thought for spacing. Great play and progress girls!

U11A’s had a busy afternoon at the LGJS netball tournament on a drizzly afternoon. Having missed out on a game last week, it took the girls a little while to get into their Netball. As they settled the girls demonstrated some lovely footwork in the attacking circle and grew in confidence in the defending circle going forward for interceptions. Centre court worked well and reminded each other to change their channels. The girls have identified some things to work on before next week which is a wonderful position to be in moving forward.